Hello from Israel – we made it! Our morning started very early with an alarm at 6:30 am which gave us an hour to get ready, have breakfast and meet at the Theater Royal for our excursion.

Today we had a 10 hour tour that would visit Jerusalem and Bethlehem.

Angie and I headed to the Windjammer to meet mom and dad for breakfast. We ate quickly and got ready just in time to get to the Theater Royal.

By 8 am the ship had docked at Ashdod and they were proceeding with immigration. Along with the rest of our tour we were escorted off the ship and into the terminal for face to face immigration.

As I mentioned yesterday, everyone on board must do immigration to Israel – even if you don’t get off the ship in port. Everyone on a Royal Caribbean tour gets priority, so most people on independent tours weren’t able to clear immigration until later in the morning.

Most were rushing to join a Royal Caribbean excursion or move their independent tours to later in the day.

I highly recommend if you are in a port that requires immigration to book an excursion for priority disembarkation. We also had this same mentality for Santorini, where we have to bid and will be given priority over an excursion. 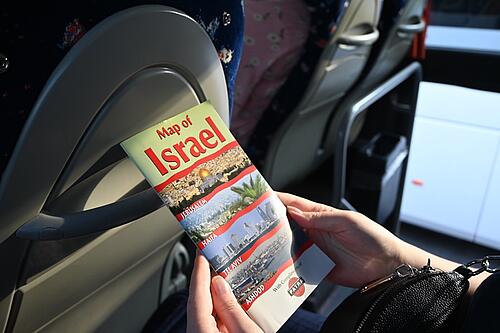 Immigration was quick and painless. Based on our research, we were prepared to be patient to go through immigration; it was a breeze for us on our excursion!! We were given a pass to keep in our passport throughout our stay in Israel.

Instead of a seal, the doorway serves as our entrance into the country. An Israeli stamp could ban future travel to Arab countries, so the pass is a way around that. 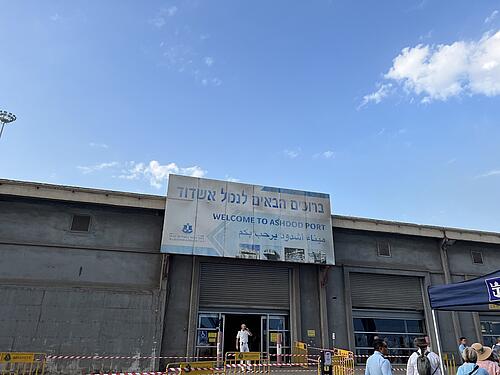 We were on the tour bus at 8:30 and on our way to Jerusalem from the port. The journey is about an hour into town and the port is very industrial.

Our guide, Ronen, gave us the lowdown on Israel. Our first stop in Jerusalem was a lookout overlooking the entire city. We could see the Dome of the Rock with its golden dome in the distance – it is one of the most photographed buildings in the world! 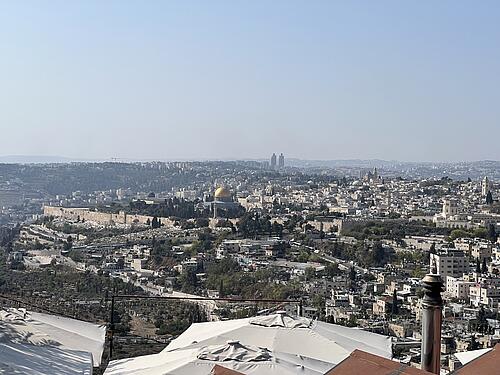 The Mount of Olives, which Christians believe to be the mountain where Jesus the Messiah ascended to heaven, was also visible. 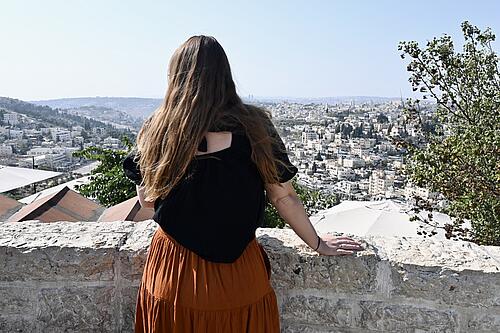 It was a beautiful stopover with a panoramic view of mountainous and hilly Jerusalem.

After the photo op, we headed to the Old City to see the Western Wall. We had to pass a basic security check. There was a side for men and a side for women, but no one followed that. 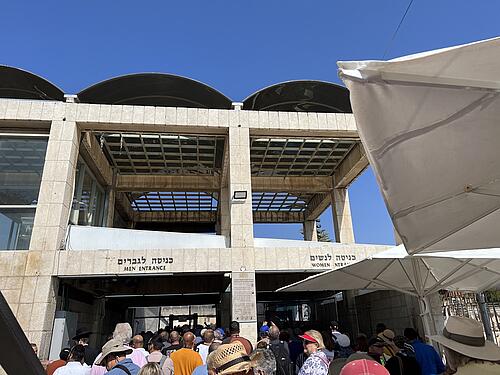 Once inside, there was a large plaza surrounded by the Western Wall with many people praying. 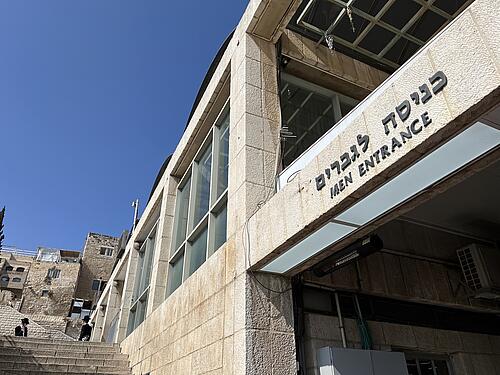 This is made of ancient limestone in the Old City of Jerusalem. The old wall, a small segment still standing on a once larger perimeter wall, is a sacred place for Jews. It is common to write your prayers/wishes on a piece of paper and place the paper in the wall. 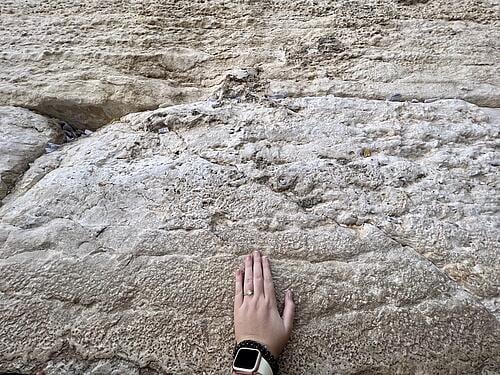 There were 2 sections of the wall, one for men and one for women. Interestingly, the male side is probably three times larger than the female side. The men’s side has tables with overhanging purple tablecloths while the women’s side had none. 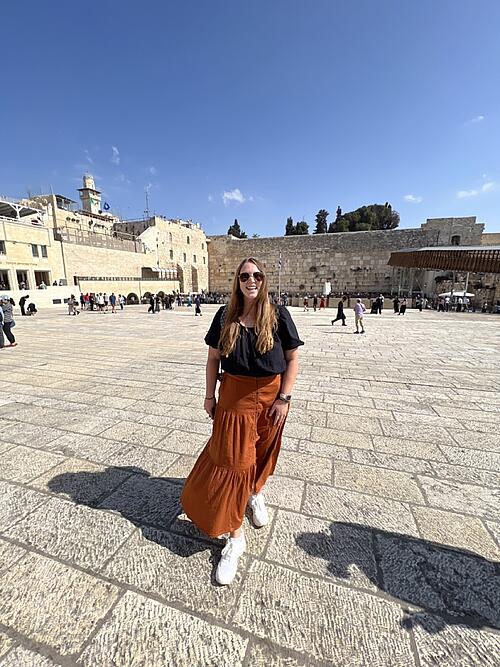 There was also a barricade between the two sides. The women’s side had stools you could step on to see the men’s side.

I read that women had to wear head coverings at the western wall, but that didn’t seem to be true. If so, no one applied the head coverings. 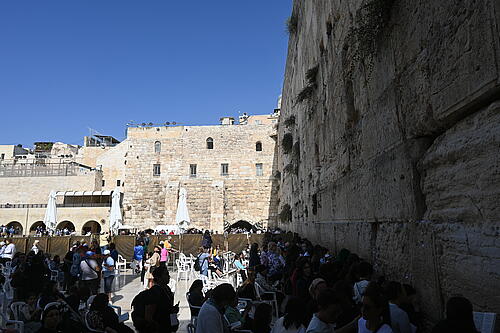 After our stay at the Western Wall, we passed through a series of markets. These remind me of medians in Morocco with lots of trinkets and vendors. 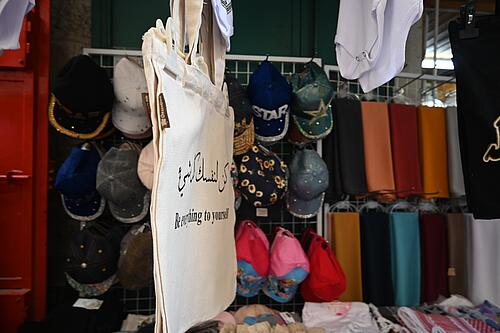 As we progressed through the alleys, we discovered a few stations of the cross along the way. Quite the juxtaposition of hearing about Jesus walking those same steps to seeing Mickey Mouse on a pile of t-shirts.

The alleys were narrow with many shops, but it was fascinating to see and learn about the different stations of the cross that led us to the Church of the Holy Sepulchre. This church has 2 gray domes that can be seen from all over Israel and it is considered one of the holiest sites in Christianity. 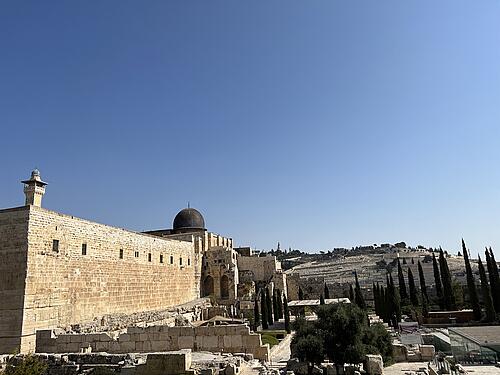 At this point the guide said we would be climbing steep and slippery stairs inside the church. Some of the other members of our party said they were unable to climb stairs. Upon entering we saw a lady crawling down the stairs because she was so determined to get to the top. 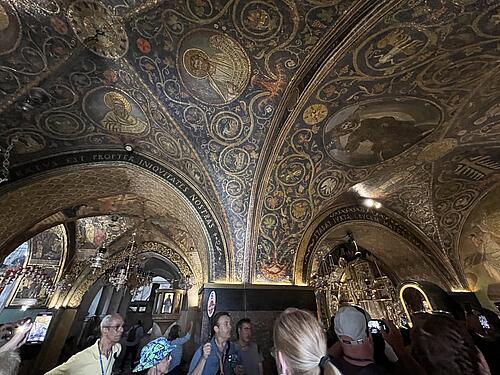 That’s why I talk so much to others, and especially my parents, about the importance of traveling while you’re (relatively) young and capable. This kind of journey is exhausting for able-bodied people, but we struggled to last all day.

The tour said we would be walking on uneven surfaces for 3 miles – and we definitely did. Some complained that the tour was too quick for them, although we found it appropriate considering how much we saw in one day. 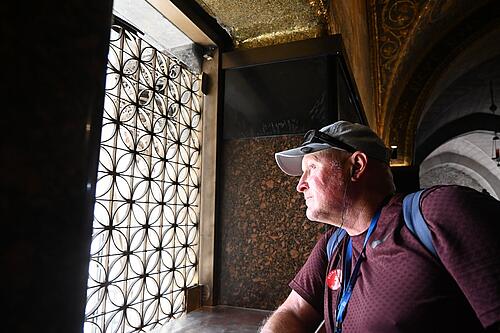 Inside the church, we climbed the stairs to see several sacred spaces, including the places where Christians believe Jesus was nailed to the cross and crucified. Many lined up to kiss and bow before these sacred places, although our visit did not allow time for this. 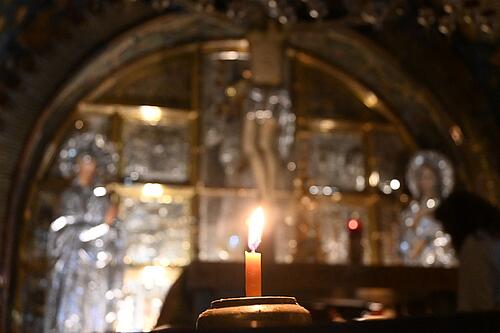 We also touched the Stone of Anointing, which is known as where Jesus was laid before being buried. Many took items personally, such as veils and souvenirs. and rub them on the stone as well. 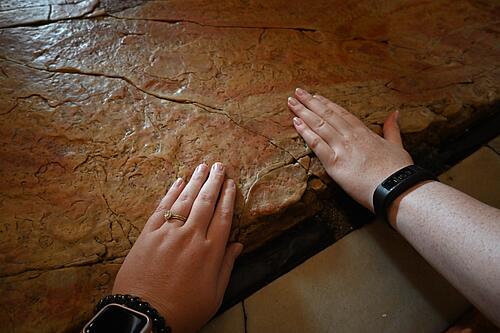 Finally, we were able to see the tomb of Jesus inside the church. According to traditions dating back to the 4th century, Christians believe this is the place where Jesus was resurrected after his death. There was a long queue to enter the tomb with only one person able to enter at a time, and our visit did not include that. 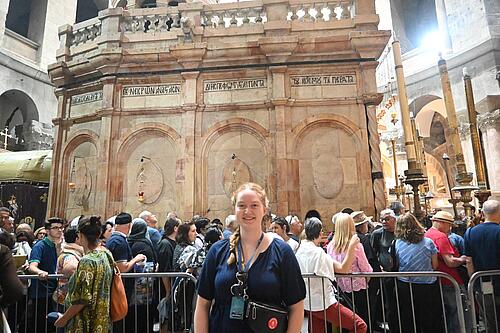 We snuck through the markets quickly and I grabbed a magnet, which is my favorite souvenir for my fridge. I haggled from $7 to $3 which is what I expected. 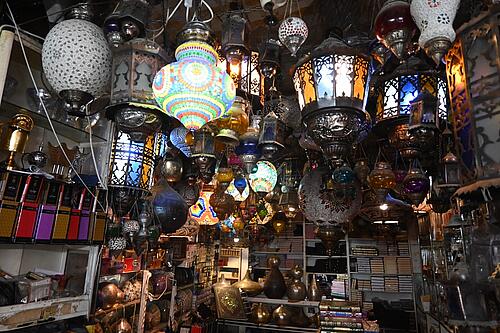 Back on the bus, we stopped for a buffet lunch with all the other tours on the ship. There was a wide choice of food served buffet style.

We finished eating and the bus started heading towards Bethlehem. Those familiar with the area will know that Bethlehem is under Palestinian rule in the West Bank, so we had to enter their territory. We passed through the border control, but we could see barbed wire and police guarding the entrance. 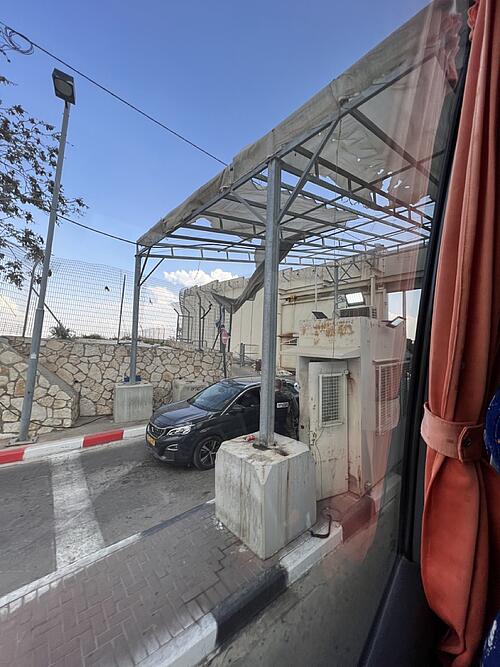 Upon entering the West Bank, we also got another tour guide that would cover Palestinian sites.

I could tell immediately that Bethlehem was not as nice as Jerusalem – there were many run down buildings and the streets were filled with garbage.

While I’ve always imagined Bethlehem as some sort of crèche with donkeys, I was shocked by the KFC right in the city center. It was nothing like I had imagined. 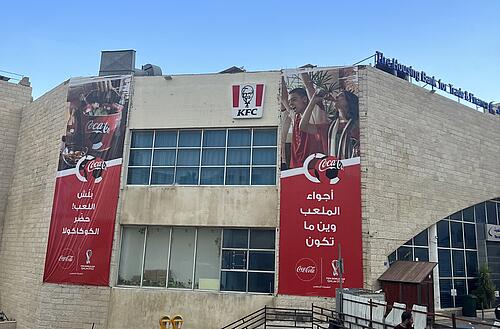 Our new guide took us to the Church of the Nativity, where Christians believe to be the birthplace of Jesus. We didn’t have time to wait in the 2 hour queue to see the nursery location, but those queuing showed signs of frustration and anxiety as they stood in the heat. 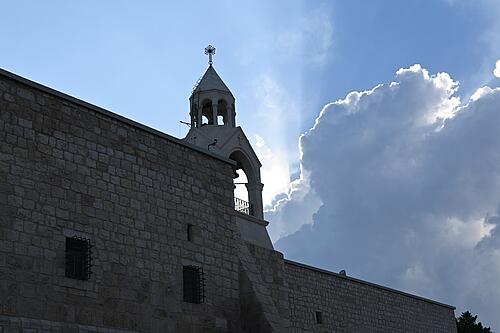 At one point someone in the line pushed and yelled at our guide as he maneuvered our group around the line to talk about the restoration of the church. 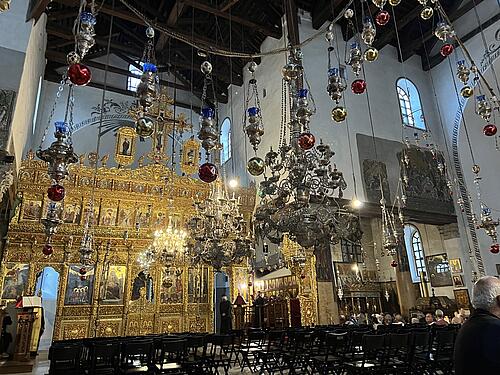 Throughout this tour we lost 2 separate bands who would join us on a later part of the tour. I thought the guide was joking when he said it was normal for at least a few people to get lost or left behind! Luckily our ship is docked overnight and they gave the locations to share with taxi drivers to meet up.

I had always imagined some sort of farmhouse on the prairie with a cute little nativity scene in a barn – and it was nothing like what I expected. Travel can surprise us, that’s for sure. 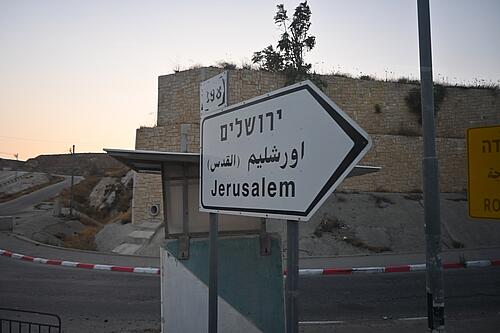 We made a quick stop to shop at a store that was almost certainly sponsored by Royal Caribbean. They put the face of Jesus on everything you can imagine in this store – even nail clippers.

This was the last leg of our visit, and I took advantage of the hour drive to return to the ship to browse the photos and start on this blog.

The weather today was perfect and about as good as we could have hoped for! It was warm but not super humid with a slight breeze.

We are so grateful that we booked this excursion instead of doing a third party excursion as we had planned. We had a full day and everything was on our agenda before sunset. We certainly wouldn’t have seen everything we wanted to without getting off the ship so early with priority immigration through the RCL excursion we booked. 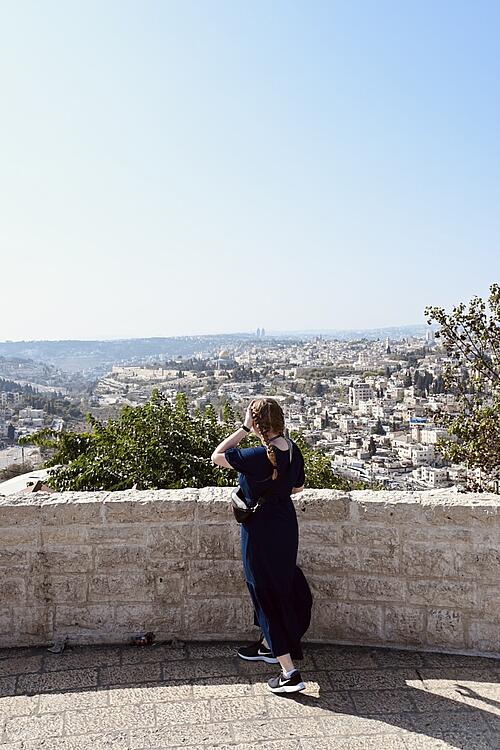 Before entering the port, we had to go through an immigration check where a local immigration officer asked our guide to sign a form. Almost all of the tours came back at the same time and it took us 30 minutes from the time we entered the port to the time we arrived at the ship. 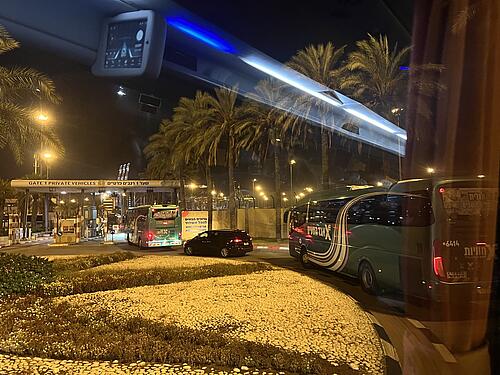 Dinner tonight was BBQ themed in the Windjammer! It’s crazy to think that we strolled by some of the oldest religious sites in the world and then returned to the ship to enjoy corn dogs, ribs, mac and cheese and funnel cakes. 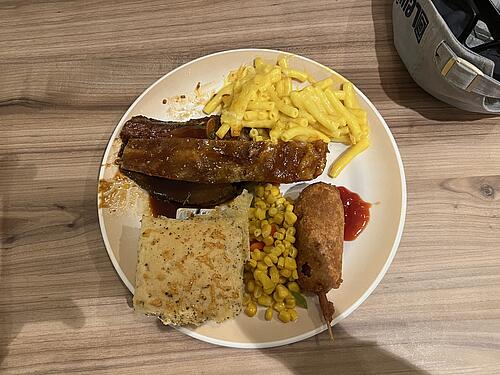 Tomorrow we wake up even earlier with an alarm at 5:45. We will head to the Dead Sea and Masada for a day trip! It takes 2 hours to get to the Dead Sea from Ashdod, so we are planning another long day exploring this beautiful country.

Until then, good night everyone!

Previous The oldest casino in the world – Casino.com blog
Next Why online dating apps are a big scam